The Cluj-Napoca Pilot within the REFLOW project focused on the co-design of the city’s energy transition and testing innovative tools in this regard. The Pilot invested in energy efficiency, optimizing consumption, sharing open data and uniting local administrators, communities and energy service providers. The Pilot conducted an energy consumption analyses of one municipality-owned buildings after a retrofit kit was installed.

The Retrofit kit was co-designed with local partners and stakeholders for the specific building – the dormitory of the high school in Cluj-Napoca. The kit was designed as a turn-key ready system, minimally-invasive intervention (no putting down walls, no tearing the finishing away, nothing of that sort) with significant impact on energy and cost efficiency. The innovative monitoring platform for smart metering systems retrieves data from the systems, stores them in a database and displays them on a web portal. All modules, applications and component routines run on the developer’s server.

The interface access needs a user and a password and displays the list of readings for each meter, the consumption of each meter in a selectable range, the location of the meters on the map (Google maps) and details about the installed meters. In addition to these display features, the system provides meter management features and graphical percentage analysis of transmissions every 15 minutes. The 15-minute transmission interval complies with the latest ANRE requirements in the field of smart metering.

The meter data is entered into the system by the user. These include meter series, initial reading, meter type and GPS coordinates.

The software can retrieve data from multiple smart metering systems on the endpoint interface. 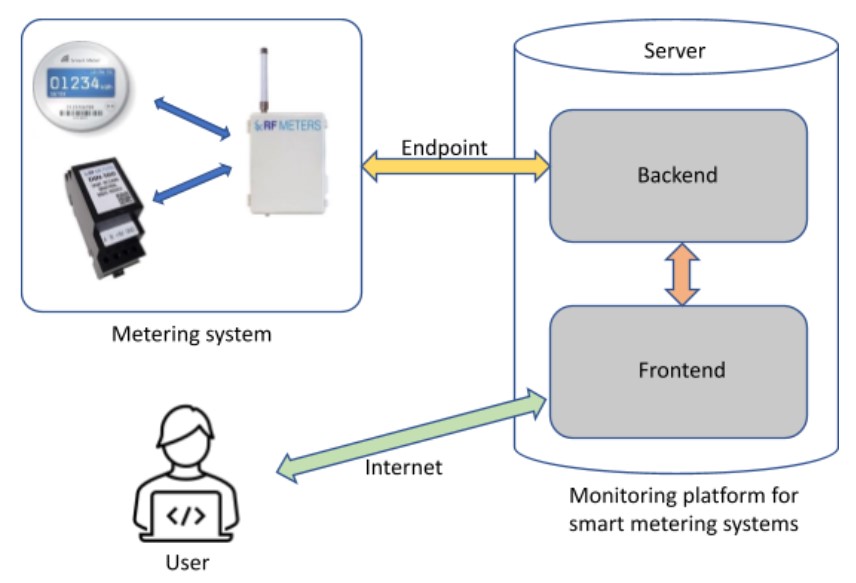 The system can be developed by adding new functionalities and modules according to the user’s requirements.

The aim of the Pilot was to observe the impact and the potential of circular economy-like actions for Cluj-Napoca energy efficiency practices as well as to study the synergetic positive effects of collaboration among multiple stakeholders in the community (e.g. public authorities, research institutes, clusters and the general public/users).

It can be considered a success, considering both – the collaboration between the regional stakeholders and the efficiency of the solution designed and putted into use.

By the end of the project, Cluj-Napoca Pilot expects more than 15% decrease of electricity consumption in the building, due to the intervention.

Energy efficiency is a priority in our region and one of the main perspectives through which the Green and Circular Economy topics are approached. In this regard, the Retrofit Kit is an efficient solution and a good practice example witch, for sure, will be replicated in the future.