Food Market 4.0 Dashboard (FM4.0D), implemented by the makerspace Polifactory (Department of Design, Politecnico di Milano) as part of Reflow’s Milan pilot outputs, aims at employing digital circular solutions to tackle the main challenges that Urban Circular Economies unravel for the Milanese agrifood supply chain. One of the main objectives was to co-ideate, co-design, and co-create a tool that implements and fosters circular economy principles through digital innovation.

A picture taken during one of the visits at So.Ge.Mi wholesale market in Milan (credits: Politecnico di Milano)

In recent years covered food markets have become relevant actors in urban revitalization actions and sustainability initiatives. The City of Milan considers food markets as actors that can stimulate the transition towards circular business models based on sustainable processes of access, consumption, and use of products and services linked to the agri-food system.

The starting point that led us to implement and test FM4.0D is ethnographic research conducted in some of the city’s markets: the So.Ge.Mi food hub and two municipal markets such as Prealpi and Morsenchio. We decided to focus on the fruit and vegetable chain. Every day the vast majority of fruit and vegetables purchased by vendors of covered markets, greengrocers, restaurant owners, and canteen managers (excluding supermarkets) pass through So.Ge.Mi.

We spent a couple of days inside the So.Ge.Mi wholesale market, the largest in Italy. We observed and studied the complex dynamics involved in managing food flows: hundreds of tonnes of fruit and vegetables are delivered, sorted, and sold every day. In addition, we met and interviewed the main stakeholders who operate in and with the general market: municipal market operators, national wholesalers and those specialised in exports, NGO activists involved in recovering food for donation, logistics service providers for food chains, and developers of start-ups linked to food delivery in urban areas.

The observation of the covered markets reveals to us a network of places that are starting to connect with new services and networks – from food apps to food delivery. At the same time, the Milanese fruit and vegetable chain reveals some discontinuities in product tracking. This problem is not due to a lack of info on the products but rather to the fact that fruit and vegetable tracking often passes from one actor in the chain to another more in an analogic than digital way using different and not aligned tools. Moreover, the ethnographic research carried out in the Milan pilot showed that covered markets do not have an adequate level of digitalization to monitor food flows: lack of digital infrastructure, vendors with low digital skills, etc. Finally, there are no integrated systems for tracking fruits and vegetables from the wholesale market to the covered ones.

Two ideas drive the co-design process of the Food Market 4.0 Dashboard. The first idea is to develop a solution adaptable for a “distributed-distribution system” which can converge and align the various food tracking needs. Working on this idea means tracking food from the general to covered markets and potentially extending tracking to farmers and food delivery and logistics services. The second idea is to develop a system that can improve knowledge about the food flows in and out of market shops, improve the management of purchasing, storage, and sales and thus prevent food waste.

Identifying covered markets as suitable neighbourhood food hubs to implement our project idea, we chose the Morsenchio market as the ideal context for the testing phase.

It is a municipal indoor market located in a peripheral neighbourhood, recently renovated, managed by the Morsenchio Consortium (whose members are the shopkeepers of the market itself) and where only one fruit and vegetable seller operates. We, therefore, started a relationship with the Morsenchio Consortium and closer collaboration with Mr. Paolo Mazzucchi’s Frutta & Verdura shop. This collaboration encouraged us to design a solution that could apply to the distributed system of markets and at the same time be scalable, taking into account all the characteristics of a specific shop.

Food Market 4.0 Dashboard is an integrated system of both hardware and software solutions: a set of reusable crates, a Smart Scale system, and a Smart Gate system.

The full system works to track and monitor the flow of fruit and vegetables within the covered municipal markets of Milan.

The prototype of the FM4.0D has been implemented in three different steps. The first step concerns the configuration of existing hardware tools (crates, Smart Scale and Smart Gate) to demonstrate how the system works. The second step is the design and prototyping of a digital dashboard that connects all the hardware tools. The final (ongoing) step concerns the design and prototyping of the open-source versions for the Smart Scale (Open Scale) and Smart Gate (Open Gate) systems, stimulating the openness of the solution.

The use of reusable, foldable, and robust plastic “smart crates” instead of the traditional ones is one of the key aspects of FM4.0D. For this reason, we established a collaboration with CPR System to experiment with the use of their crates equipped with UHF RFID labels which have enabled us to open up a wide range of possibilities for tracking the goods passing through the shop. Indeed, RFID technology makes it possible to strategically map portions of the stall by using RFID antennas to create Smart Gates. The Smart Gates would reveal the precise position of each crate and its content, say in the stall displays or the warehouse.

Furthermore, FM4.0D connects a scale to its digital layer to create a correspondence between the crates and their content. All the parts of the system (RFID readers and antennas, Crates and RFID labels, Smart Scale) allow the user to perform some crucial actions aiming at the synchronisation between the physical space and the digital layer of FM4.0D: 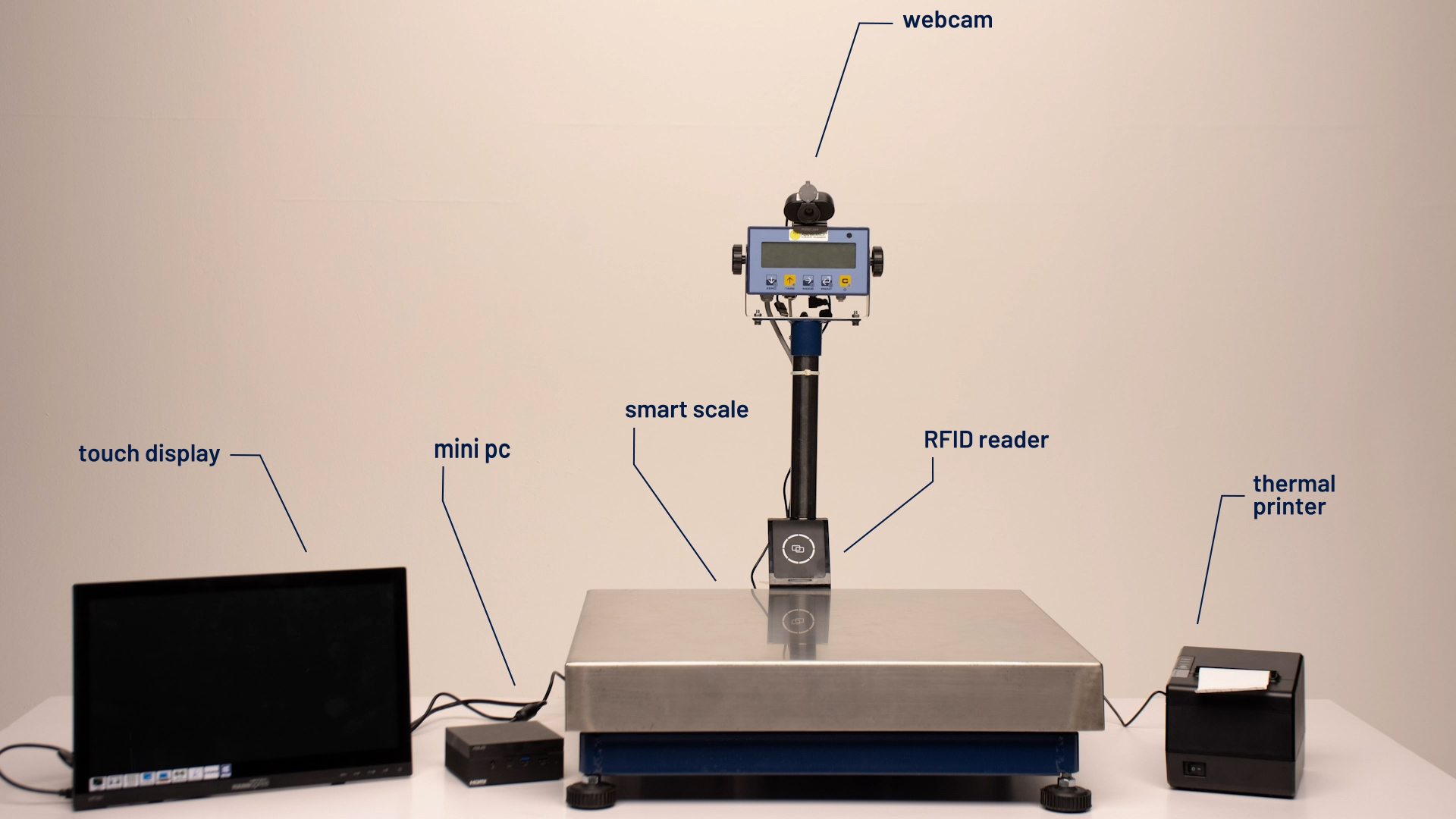 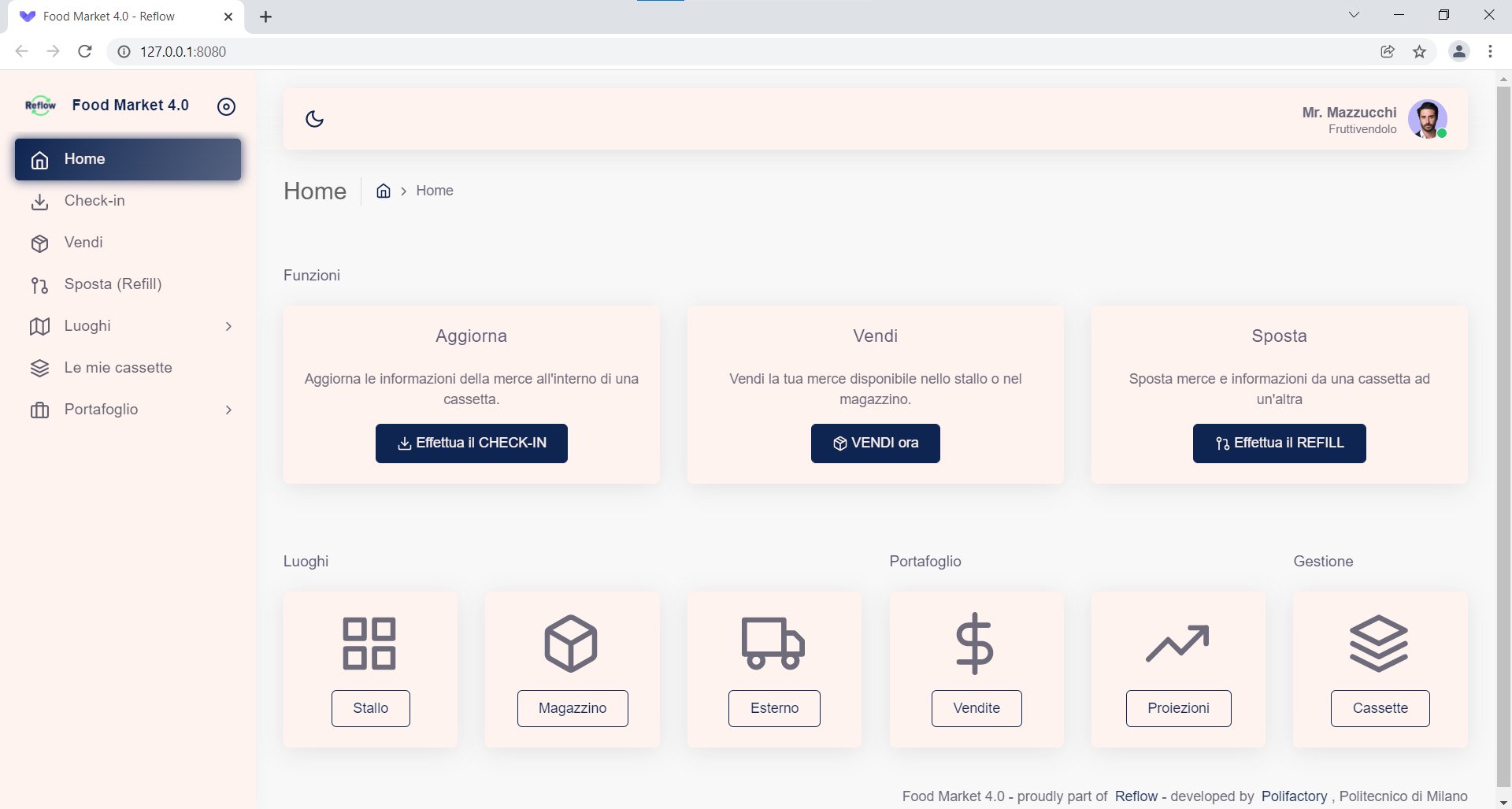 A real test of FM4.0D within the Morsenchio Municipal Covered Market took place daily from the 27th January till the 4th February 2022. All the hardware elements have been temporarily installed within the market. In particular, the Smart Scale has been installed within the stall while the Smart Gate is between the stall and the warehouse. 100 smart crates have been donated by CPR System to the market greengrocer to test all the activities foreseen by the scenario (check-in, warehousing, sale, refill). In this way, it has been possible to measure data related to the quantity and type of fruit and vegetables entering and leaving the market.

The market greengrocer (Mr. Paolo Mazzucchi) tested the prototype supported by the Polifactory team. The installation of the FM4.0D system in the stall required no intervention in the shop and warehouse and no adaptation of the existing equipment. Despite a lack of digital skills, Mr. Mazzucchi has been able to use the smart crates to track the food flows starting from the basic functions offered by the digital dashboard. Overall, this test has been a useful experience that allows us to understand how to physically and humanely approach the digital transformation of covered markets, stressing two aspects: the importance of developing technological solutions capable of integrating with spaces without ‘colonising’ them, and the importance of engaging vendors in the use of technological and stimulating them to be not the last link of a food chain but the first driver of the circular transition.

Currently, we are completing the prototyping of Open Scale and Open Gate, the open-source version of the Smart Scale and Smart Gate systems. Food Market 4.0 Dashboard in addition to being a hybrid system of standard HW/SW elements also has the possibility of being composed, integrated, or replaced by open-source units.

Open Scale is a Smart Scale that can be controlled from a dashboard via a tablet and complemented by an information display for market customers. The idea behind Open Scale is to provide an instrument composed of standard components (some of which are already certified) and others created through digital fabrication. Open Scale is a system designed to be customisable in various components and sizes according to different weighing needs, different types of goods to be weighed, and different commercial activities.

Open Gate is a system consisting of an RFID beacon amplified by a high-frequency antenna and complemented by a smart device that allows the monitoring of temperature, humidity, and the position of goods, even while on the move. The system is mounted on an extensible rod that allows placement on different types of gates, gates in places such as warehouses, cold stores, vans, and trucks, to track the routes and storage conditions of products.

At the same time, we are interested in extending and implementing our solutions by involving actors and stakeholders that we have met throughout the development of our project. There could be several ways through which FM4.0D could expand to contribute to the circular transition of the Milanese agri-food system.

The first way is the scale-up of FM4.0D to other covered and open-air markets, extending and diversifying the food activities and businesses involved. In this case, FM4.0D could track and monitor foods such as meat and fish and processed foods such as bakery products and dairy products.

The development of FM4.0D on a macro scale could instead trigger a bottom-up process to align the different supply chains and unify the tracking of fruit and vegetables “from Farm to Fork”. Within this process, a relevant role would belong to greengrocers who, by equipping themselves with a system like FM4.0D, could trigger a chain reaction by leveraging food wholesalers and producers to adopt smart crates as a standard. This scenario, which primarily strengthens the last mile of the supply chains involved (i.e. those closest to the end customer), would also reinforce the collaboration between FM4.0D and the food delivery services that are rapidly developing in cities, thus integrating full food tracking.

Finally, a system such as FM4.0D could collect different data that would contribute to a better understanding of the dynamics of food systems at the urban level. In this perspective, food traceability and waste prevention data could complement information on sales, delivery, and consumption by generating an urban topography of food needs. The analysis and interpolation of these data could stimulate the development of new policy initiatives dedicated to the circularity of urban agri-food systems.